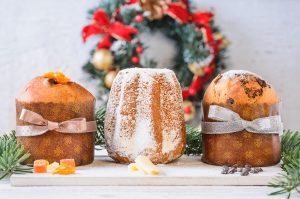 Trees are twinkling, piazzas are decked, nativity scenes in place in Italy – now it’s time to break open the Italian Christmas dolci! Across the world, the holidays are an excuse to let loose and enjoy a few more tempting sweets than normal. In Italy that means certain go-to foods that everyone enjoys, along with regional specialties that change as you travel the peninsula.

First off – the Italian Christmas cakes. Like Pepsi and Coke, many Italians have a marked preference of one over the other – panettone or pandoro.

Panettone is a dome-shaped round cake from Milan, yeast-leavened and studded with candied fruit and raisins. Due to its long curing and rising process, the cake is fluffy, airy and moist. Its name is derived from the Italian word for bread, pane. The cake’s history is long, dating at least back to the 15th century when it was only consumed on feast days as a special treat given its expensive and hard-to-find ingredients (wheat flour, butter, candied citrus fruit) as well as long and complex baking process using a natural mother yeast. It quickly became associated with Christmas, being the most important feast day on the calendar. Most likely its origins go back to ancient Rome, when they sweetened bread with honey and fruit. 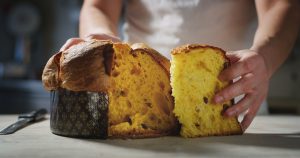 Pandoro instead is from Verona, a vertical frustum-shaped cake shaped like a star with eight points. This is also made from a natural mother yeast along with wheat flour, eggs, butter, sugar, vanilla and salt. Light and airy due to its leavening, the texture is soft and silky. The origins of the pandoro go back centuries to a large and spongy focaccia made in Verona called nadalin, which also had the shape of an eight-pointed star but was flat. In 1894 Domenico Melegatti began producing the modern pandoro (meaning bread of gold) with its vertical shape; the company is still today considered one of the top commercial producers and still uses the same mother yeast from 1894! To be good, a pandoro must have had three stages of “proofing” and at least 38 hours of work. 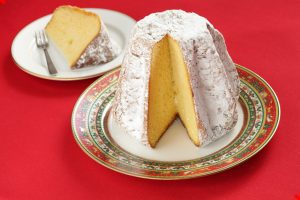 d-quality pandoro needs no dressing other than the characteristic powdered-sugar dusting, there are ways to jazz it up by cutting it horizontally into multiple sections and reassemble it to look like a Christmas tree by adding layers of ricotta or mascarpone, Nutella or chocolate and fruit jam. Kids love this! 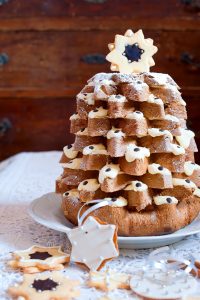 In Italy you can find both cakes in artisanal bakeries and pastry shops in addition to the local grocery stores where they are sold in colorful boxes. Many of the commercial versions are quite good (Melegatti, Motta, Bauli, Le Tre Marie to name a few) and cost only a few Euros. It is traditional to serve the cakes with Prosecco or dessert wine, coffee or vin brulé (spiced mulled wine). 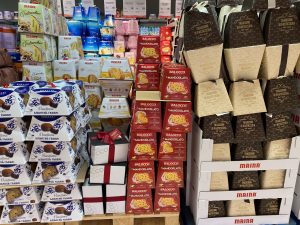 There are other typical Christmas sweets readily available across Italy. In Tuscany, you’ll find the scrumptious ricciarelli cookies from Siena, oval-shaped and made from almond paste and honey with powdered-sugar topping. Other versions include chocolate covering or decoration. These tasty cookies date back to the 14th century and are readily available in pastry shops and grocery stores in Italy.

Also from medieval Siena is panforte or “strong bread” due to its spicy flavor. The flat, round confection is a cross between a fruit cake, candy and honey cake, made with sugar, honey, nuts, candied fruit, spices like cloves, nutmeg and cinnamon and just enough flour to hold it together. Both of these medieval Sienese sweets can be enjoyed with a glass of Vin Santo (sweet Tuscan dessert wine). 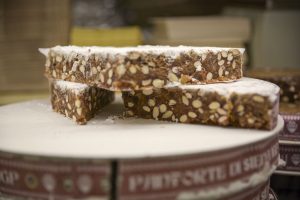 You can find beloved torrone across Italy, a nougat confection containing as a base sugar, honey, almonds and egg whites – it’s been eaten for centuries as far back as the ancient Romans. Origins are disputed and vast, but it appears that the Arabs had a hand in it when they came through Italy in the 9-11th centuries, and then Cremona from the 15th century developed the dessert into what we see today. Over time the extra ingredients can vary – different nuts, chocolate and candied fruit can be added – texture can be soft and chewy or crisp and crunchy, but it has become a staple at Christmas. The name torrone comes from the Latin word “to toast” as in toasting the nuts. 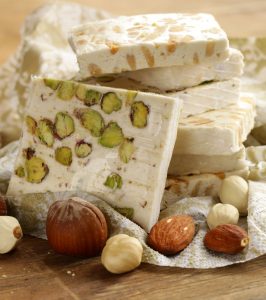 What about Southern Italy? In Naples the locals enjoy their local struffoli or honey balls consisting of small deep fried balls of dough covered in honey, cinnamon, bits of orange rind and nonpareils. Served piled on a plate or in a ring shape, they come out at Christmas in Naples, also Calabria where they’re called scalilli and in Abruzzo they’re known as cicerchiata. In Sicily they call them pignolata. 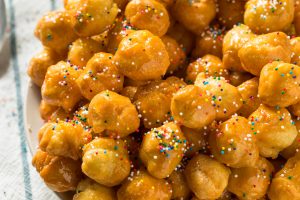 Sicily never shies away from the sweets, especially at important holidays. There they make one of our favorites, buccellati cookies filled with a mix of dried figs, almonds, walnuts, hazelnuts, lemon, cinnamon, vanilla and honey – all the best flavors of Sicily. Every family recipe is different, so the ingredients and aspects may vary but they will be served on every Sicilan table. The name comes from buccellatum, or nibbled in Latin. You might also see a larger ring cake version. 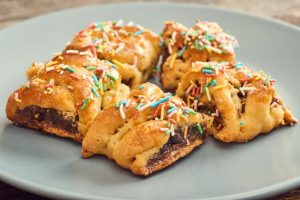 If you are lucky to spend Christmas in Sicily, you will also see the Queen of Sicilian desserts, the cassata siciliana – a sweet and rich cake made with sheep’s milk ricotta, sponge cake, marzipan and candied fruit. The marizan rim is colored a cheerful bright green to complement the candied fruit on top, and there may be bits of chocolate inside. This luscious dolce is a combination of several of the cultures that passed through the island of Sicily over the centuries – from the Arabs to the Normans to the Spaniards – each leaving their delightful mark on this stunning islands culinary and cultural history. 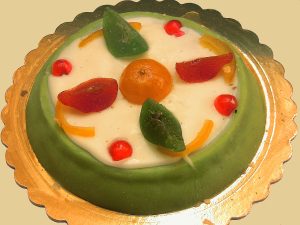 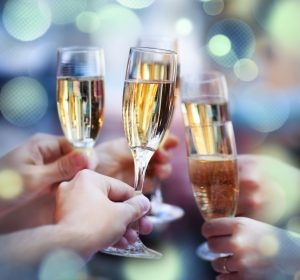