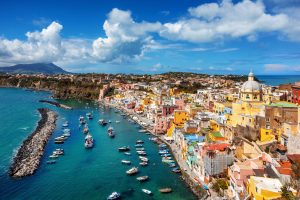 This past week the colorful island of Procida won the honor of being chosen as Italy’s Capital of Culture for 2022. The tiny island, located just off the Gulf of Naples, is a popular destination for summer vacationers and day-trippers from Naples and the surrounding coast.

The island is dotted with cheery pastel-colored houses, characteristic of the area but given an extra infusion of color here. Procida was first settled by Greek colonists in the 8th century BC – they were the first to recognize its beauty and strategic location. At just 1.6 square miles the island can be explored in a day, by walking through the characteristic pathways, heading to its beaches for a dip in the Mediterranean or enjoying a boat ride around the island. It’s easy to grab a public ferry from Naples for the hour-long journey, or else charter a boat for the day for a pleasant cruise from anywhere along the coast around the Gulf of Naples. 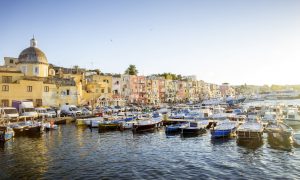 Coming from the mainland you’ll arrive at Marina Grande port, welcomed by the quaint and vivid houses and various boats from fishermen’s typical wooden row boats to sail boats to motor boats of every type. This is the central hub of the island, filled with cafes, restaurants and shops. The charming yellow 18th century church of Santa Maria della Pieta’ dominates the square. 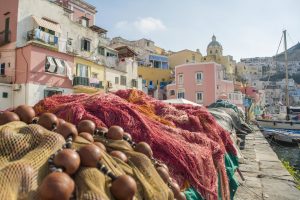 Other ports you’ll see on the island include Marina Chiaiolella on the west coast, one of the most popular destinations in Prodica – stroll along its charming pier while enjoying the views of land and sea. 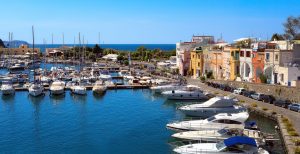 Marina Corricella across the island to the east graces the most beautiful and picturesque fishing village on the island; Corricella is often featured in photos of Prodica with its long waterfront, quaint harbor and bright colored houses. Here you can take in a tangle of arches, domes, windows, terraces, balconies, staircases and colorful facades that help make the island famous. No cars in this part of the island – you must reach Corricella by sea or foot!

Another area worth visiting is the fortified medieval village of Terra Murata built on the highest part of the island. You’ll need to walk up the hill to reach it, but your reward is a breathtaking view on the Gulf of Naples. 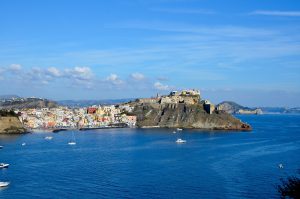 There are a few sights to visit here, including an historical ex-royal palace and an abbey from the Renaissance period. For those wanting a little more physical activity, there are delightful hikes and walks to be had, always accompanied by nature and stunning views. 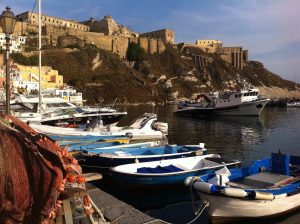 Its picturesque Mediterranean houses, alleys and beaches have made Procida a movie set of choice – you might recognize glimpses of Procida in films like Il Postino and The Talented Mr. Ripley. The famous cafe featured in Il Postino is still up and running as Alla Locanda del Posti 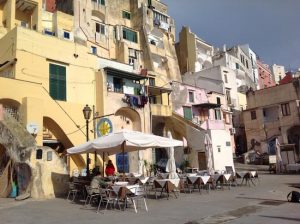 no, where you can pop in for a coffee or snack and browse the various memorabilia they have gathered from the renowned film including the actual leather postman bag that Massimo Trioisi (as Mario) carried in the 1994 Oscar-winning film. A few other locales from the film can also be spotted, like the beach, called La Spiaggia del Pozzo Vecchio, and the post office.

The popular 1999 film The Talented Mr. Ripley was also filmed in part on Prodica, in areas including the Piazza Marina Grande, Piazza dei Martiri, Via Principe Umberto and Salita San Rocco. Watch for the scene where Jude Law rides a motor scooter up a characteristic road and another where Law, Gwyneth Paltrow and Matt Damon sit on a wall overlooking the sea. The rest of the film was shot at other locations in Italy including Rome, Venice and Ischia to recreate an evocative 1950’s Italian backdrop. 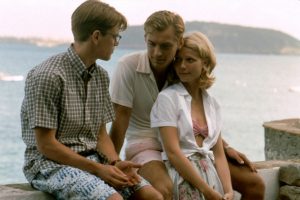 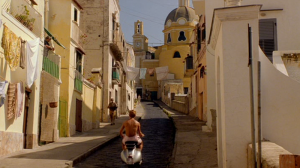 The current Capital of Culture for 2021 is the delightful city of Parma – another lovely destination to add to your list! 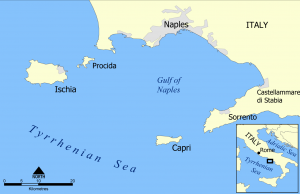