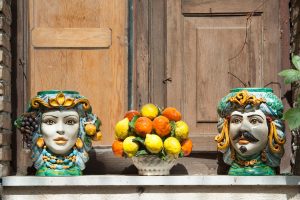 While walking through the stone streets of Taormina on the eastern coast of Sicily, you’ll be sure to spot the bright and whimsical Sicilian hand-painted ceramics in all sorts of shapes and forms. Balconies and terraces tend to be decked with particular types of ceramic pots shaped like heads, usually seen in pairs, one male and one female – the Teste di Moro or heads of Moors. They tend to be planted with cactuses or other plants that appear as funky hair on the heads, and at first glance are cheery and colorful. 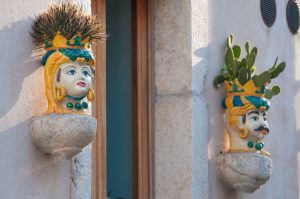 But there’s a dark story behind these traditional decorative objects, like so many fairy tales from the past with gruesome endings. The legend goes that back to the middle ages, in 11th century Sicily during the Arab domination, a pretty young woman was tending to her garden as usual on the balcony of her house when a handsome Moor merchant passed by and fell in love with her at first sight. His love was returned and they enjoyed a love affair until she learned that he would be leaving Sicily to return to his wife and children in his native country – devastating news to the besotted girl. The story continues that in a flurry of jealousy she cut his head off during the night to keep him with her forever, placing it outside on her balcony with a basil planted inside it. 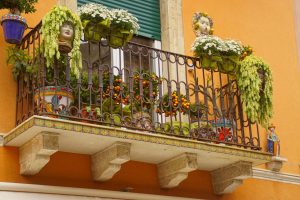 Over time the basil, watered by her tears, flourished so much it caught the eye of the neighbors who copied her and modeled ceramic heads in the shape of a Moor to reap the same benefits. 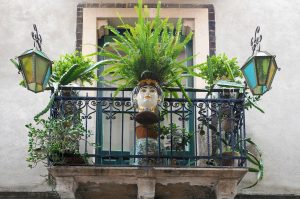 Perfumed basil plants refer to royalty (from the Greek “Basileus – King”), so in spite of the terrible act, she continued to take care of her beloved as if he were her king. This is why the heads are usually depicted wearing jeweled crowns. 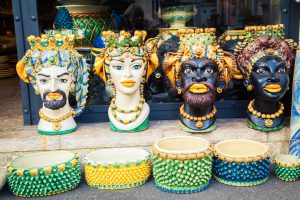 Today you will find the heads of Moors across Sicily, though there is a large assortment to be seen on the streets of Taormina. Many of them were made in Caltagirone, a town in central Sicily known for its centuries-old production of brightly colored hand-painted ceramics. They come in every size from mignon to large pots. 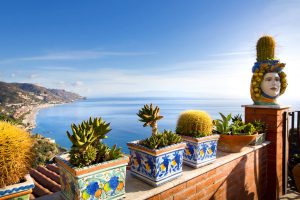 In the past years Dolce e Gabbana – Domenico Dolce is Sicilian – have used them in their apparel, marketing and window displays, thus spreading the popularity of these traditional Sicilian objects of art. They make a perfect souvenir of your trip to Sicily! 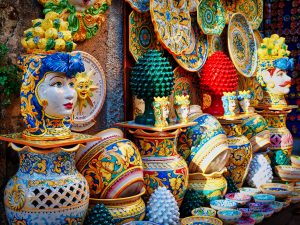