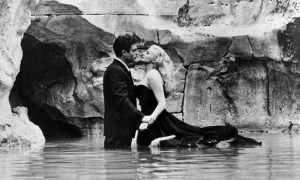 Is there another more famous and memorable scene from Italian cinema than the Trevi Fountain midnight romp from director Federico Fellini’s La Dolce Vita, the 1960 film with Anita Ekberg and Marcello Mastroianni? Who can visit or even think about this iconic Roman fountain without conjuring the scene – even if you haven’t seen the full 3-hour movie?

Here are some fun trivia facts hidden beneath the curves and swerves of that splashy scene: 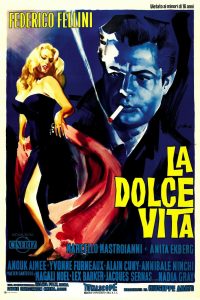 1)
While the fountain scene lasts only about two minutes in the film, it took a week of filming in early March of 1959 under chilly Roman nights. Ekberg, the consummate Swede, had no problem frolicking in freezing waters in her skimpy dress for hours without complaint…but our Italiano Mastroianni was less accustomed to the icy water. Chronicles report that he wore a wetsuit under his clothes to stay warm, and ultimately polished off a bottle of vodka to bear the cold temperatures and keep him cozily tipsy. Only in a Fellini film could this work!

2)
The glamorous, sensuous black dress with distinctive bustline worn by Ekberg in the fountain scene was reportedly inspired by a renowned portrait painted by American artist John Singer Sargent called Madame X. In the 1884 portrait, the sitter Madame Gautreau wears a striking black dress with a near identical profile as Ekberg’s – albeit with jeweled straps. The stunning painting can be seen in the Metropolitan Museum of Art in New York City. The original dress worn by Ekberg in the film is now on display in the Cinecittà museum in Rome. 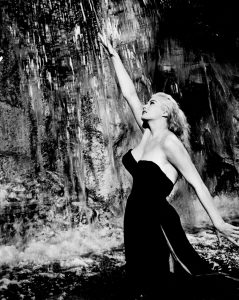 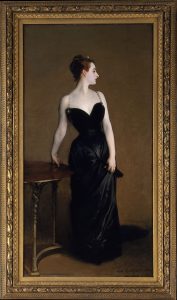 The virtuoso portrait painter John Singer Sargent, though American, was born in Florence, Italy, living there and elsewhere in Europe for several years in the late 19th and early 20th centuries.

3)
During shooting, Fellini complained that the natural tone of the water in the Trevi Fountain looked dirty. Luckily a worker for Scandinavian Airlines (SAS) who happened to be at the film shoot came to the rescue by supplying some of the airline’s green sea dye marker (used in case of emergency landing at sea) to color the water and satisfy Fellini. Since the movie is presented in black and white, this detail we can only imagine. 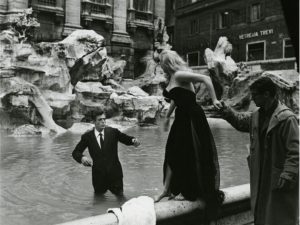 4)
During the week of filming at the fountain, crowds surrounded the piazza to watch the beautiful couple dance in the waters each evening. Onlookers perched on rooftops, balconies and palaces around the fountain to get a glimpse of Ekberg and Mastroianni. This is in perfect keeping with one story-line of La Dolce Vita itself, the work that launched the phrase “paparazzi” for the first time to describe the intrusive photographers that surrounded celebrities in the newly (post-war) sparkling and chic city of Rome in the late 1950’s and early 1960’s. The word is probably a corruption of the word papataceo, a large and bothersome mosquito (one of the news photographers in the film is named Paparazzo). We owe this now ubiquitous term to the 1960 Fellini masterpiece! 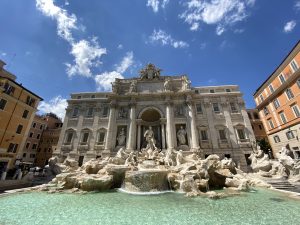